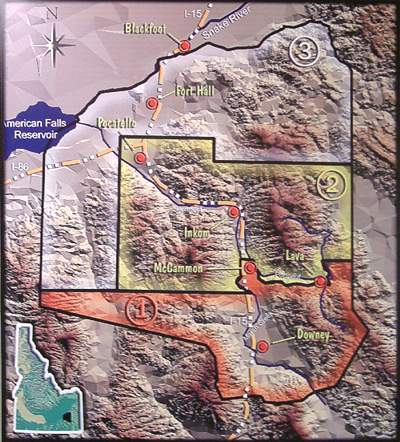 #1- On February 23, 1889, Congress finally ratified the measure of Marsh Valley including 297,000 acres of the southern portion of reservation land.
#2- On June 5, 1900, Congress ratifies the Pocatello Cession Agreement; consisting of approximately 150,000 acres be sold and "surplus" lands to be opened for settlement located at the southern end of the reservation.
#3- the present day map of the Fort Hall Indian Reservation; consists o f 544,000 acres remaining from the original Treaty of 1868; home to the Shoshone-Bannock people (including descendents of the Lemhi, Weiser, Boise Valley, Bruneau Shoshoni, and the Northwestern Band of Shoshone Nation).