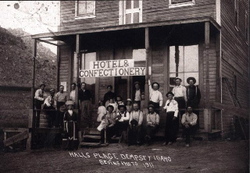 Halls Place Dempsey Idaho
John Hall and his wife Salina, along with five children, left England in 1883.  They sailed to America for the opportunity it held.  The family first resided in Oxford, Idaho.

In 1890 John Hall and his family moved to Lava Hot Springs, then called Dempsey, Idaho.  He filed for a homestead of 160 acres bordering the beautiful Portneuf River.

While here he observed many visitors to the hot springs pitching tents and camping in the area.  John Hall decided his homestead should be made into a city.

In 1907 he had his land surveyed and platted into lots, streets, alleys and blocks.  In 1911 John Hall filed the townsite plat and named the town “Hall City”.  Hall also named the streets after community leaders.

Lots were sold and houses and businesses were established.  John Hall donated lots to Protestant, Episcopalian, Catholic and Mormon churches.  Lava Hot Springs was a diverse community from the beginning.

Originally the town was called “Dempsey” after the well-known mountain man and trapper, Bob Dempsey, who kept a camp on the confluence of the Portnuef River and Dempsey Creek.  It was later named “Hall City” around 1911, as a tribute to John Hall who donated the land for the city.  Citizens decided to name the town “Lava Hot Springs” after the town’s unique resource.  A petition was then entered in the Bannock County commissioners records (book 3, page 350), by John Hall, W.B. Godrey, E.M. Gittens, A.W. Hall and A.M. Fullmer (city council members of said town), on July 24, 1915. 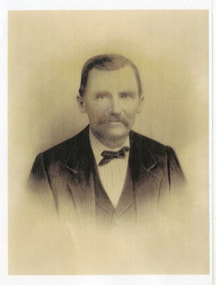 About this portrait: According to a State Historical Society of Missouri Newsletter, the process required to produce a crayon portrait started by enlarging a photograph onto drawing paper with a weak photographic emulsion producing a faint image. The artist then drew over the picture with charcoal or pastels, trying to duplicate the photograph while making it look hand drawn. The quality of the picture was entirely dependent on the artist’s skill. Tinting or gilding was sometimes added to enhance the effect.  From a few feet away, it is often taken for a photograph but viewed up close, it can be seen to be a drawing.

This John Hall portrait was found in the basement of the building that was once the Lava office of the Cassia National Bank of Burley, first organized and opened on June 16, 1917.  The Bank in Lava was organized as a State Bank by many influential area men: A. W. Hall (son of John Hall), W. R. Godfrey, Thomas F. Terrell (all 3 from Lava), G. L. Jenkins (Malad), Myers Cohn (Arimo), C.W.Brandon (Sheridan, WY), and Judge D.W. Stanrod (Pocatello).  A. W. Halls involvement in this bank might explain why the John Hall portrait was found in the bank building basement.

A life long resident identified this portrait as John Hall.  Recently, another long term resident mentioned that Terrel Hall, great-great grandson of John Hall, was a teller at the bank when it was owned by the  Kasiska family, which might also explain why the portrait was stored in that building.  Recent research has told of two fires in this building (1936 and 1986), and a flood (1962), that may have contributed to the extensive damage the portrait experienced before it came to South Bannock County Historical Center.  This important portrait was severely dirty and water stained, and had several holes.  Thanks to an award from the Sister Afreda Award (through the Idaho State Historical Society, Idaho Preservation, and Idaho Humanities Council, South Bannock County was able to have extensive conservation (by Diana Dicus) on the portrait.  Today, the conserved original portrait, along with a digitally enhanced copy, are exhibited in the museum.
Southeast Idaho Byways & History Tours ​